Move over Mustangs, the C8 Corvettes are coming for your fame.

Not long after an orange C8 Corvette was wrecked, a white 2020 Corvette Stingray has been destroyed in a crash somewhere in the United States.

These images were recently shared on the C8 Corvette Facebook Page and while no details about the incident were provided, we can see that it was quite a severe crash. We’re hoping though that no one was injured.

One photo showing the rear of the mid-engined sports car reveals that part of the high wing spoiler has been ripped off and there could very well also be some damage to the passenger side rear wheel and suspension components. Most of the damage appears to be centered around the front where we can see the frunk is missing, the bumper has been torn off and the windscreen is also potentially cracked. It also looks like the airbags were deployed in the crash. 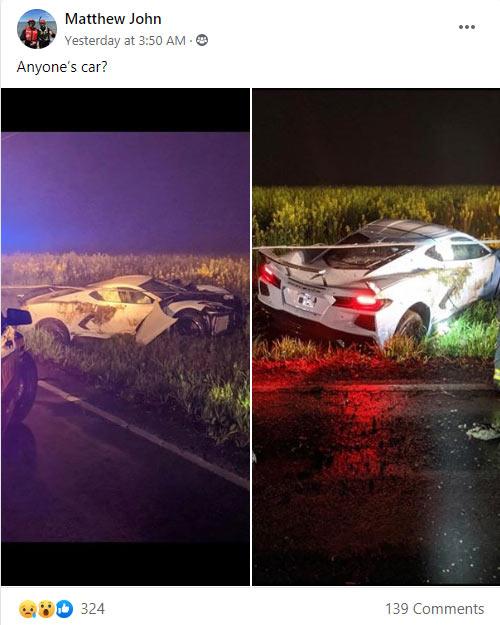 We could speculate all we like about the factors that caused the wreck but nothing is confirmed as of yet. What seems inevitable, however, is the fact that the car will likely be deemed a write-off by the insurance company but that may not be the end of this Corvette’s story.

Just a few weeks after a drunk driver ran into and totaled a C8 one day after the owner took delivery, YouTuber Rob Dahm purchased the wrecked car with the intention of transforming it into a four-rotor monster. Rear-end damage sustained by this ‘Vette appears quite minor and in all likelihood, the 6.2-liter V8 engine and dual-clutch transmission remain in good working order. Here’s hoping someone puts the powertrain to good use.