A late night drive in a Batmobile replica on Moscow’s streets was cut short by the Russian police which did not appreciate the custom vehicle’s lack of license plates.

Whether or not The Dark Knight was behind the wheel is unknown at this point, but the fact is the police officers were not impressed by the Batmobile. Since the vehicle wasn’t road-legal, they decided to confiscate it.

Traffic police pulled the Batmobile over on February 22, finding the driver to be a 32-year-old Moscow resident whose name could be Bruce Wayne, for all we know. Upon inspection, police officers learned that the custom vehicle did not have type approval and permission to drive on public roads.

They proceeded to measure the Batmobile and found that it exceeded the permissible norms. As a result, the police confiscated the superhero-mobile and towed it to a parking lot for impounded vehicles. Needless to say, the driver was penalized for violating multiple traffic laws.

We don’t know the exact dimensions of the Batmobile, but in these photos and videos it looks absolutely huge both in terms of width and length. It’s also stunning in the looks department as it closely replicates the design of the ‘Batman v Superman’ car.

Mind you, it’s packed with cool accessories including bulletproof windows, thermal imaging, a night vision camera, and fake machine guns at the front that “simulate shooting.” This Batmobile was apparently imported from the U.S. and upgraded by Russian tuner Fast Boom Pro, which likely owns it to this day as it still posts videos and photos of it on Instagram. 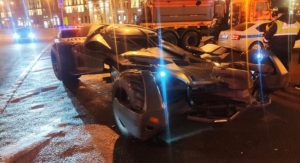 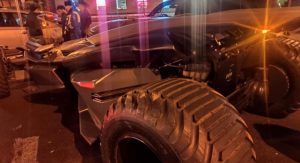 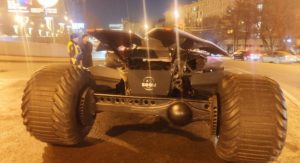