Turns out that tuned Lambos can catch fire too. This one happened in Prague, Czech Republic.

A Lamborghini Aventador modified by Mansory caught fire while driving inside a tunnel in Prague, Czech Republic, leading to its complete destruction as shown in the pictures provided by Prague’s Firefighters department.

According to local reports, the now crispy V12 supercar was a modified example by Mansory and more specifically it had the complete ‘Carbonado’ carbon body package, as well as a twin-turbo conversion that produced 1,250 HP that made this Aventador capable of a 0-62 mph (100 km/h) in 2.6 seconds.

Watch: Mini Cooper Turns Into A Self-Driving Car After Catching Fire In Slovenia

The modified Italian exotic caught fire inside the Bubeneč tunnel during the afternoon of January 16. Luckily no one was hurt and authorities were quick to respond but as is the case with so many supercar-related fires, the car was completely destroyed.

An on-site fire investigator concluded that the cause of the fire was a technical defect, with the damage estimated at over five million Czech crowns (around $220,000 in current exchange rates).

According to Mansory’s website, the twin-turbo Carbonado was limited to six examples only, featuring a completely redone bodywork in carbon fiber that made the Aventador wider by 50mm. It also features a new aero pack, complete with a new front lip, side skirts, rear wing and a diffuser which according to the tuner helped this Lambo reach 236 mph (380 km/h) – this and the twin-turbo 1,250 HP engine of course.

The modified Lamborghini was also riding on new forged alloy wheels with carbon fiber inlays, measuring 9×20 inches at the front and 13×21 inches at the rear. 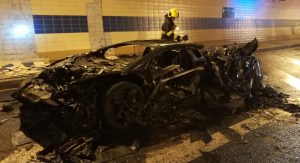 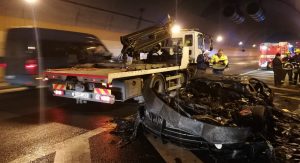 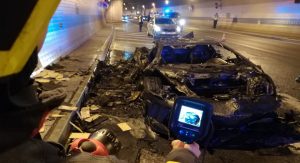 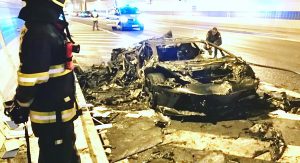 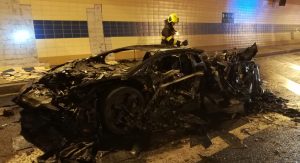 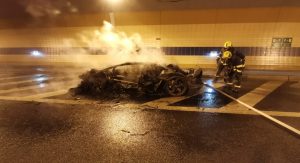 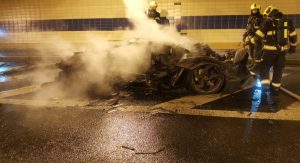