While Daimler CEO Ola Kallenius previously told journalists that his company’s autonomous driving technologies will more likely be applied to commercial vehicles, word has it that the automaker has also begun robotaxi tests in California, with the help of Bosch.

This autonomous fleet is comprised of some 30 vehicles, most of them being Mercedes S-Class models equipped with sensors such as long distance laser scanning LiDARs, sources familiar with the matter told Autonews Europe.

“We have not put the project on ice. We are looking at where we can improve efficiency and gain synergies so we don’t unnecessarily duplicate or triplicate our development work,” said one of the sources. “This pilot program is about capturing the user experience.”

While these cars can allegedly drive themselves, a driver is still required to be behind the wheel at all times due to safety concerns.

The German carmaker has already been testing Level 4 cars on public roads in Stuttgart, Germany, although these new California tests will mark the first time in which the occupants are not employed by either Daimler nor Bosch.

What does the future hold?

Last year, Mercedes introduced the S-Class cooperative concept, featuring a 360-degree light signaling system for communicating with pedestrians and the surrounding traffic. These lights will flash in various ways so as to inform other motorists or pedestrians that the car is about to brake, or about to begin moving.

You can see how that system interacts with pedestrians in the video below. 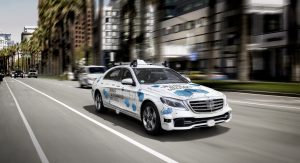 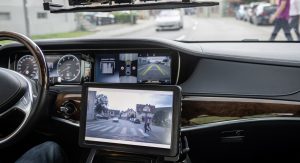 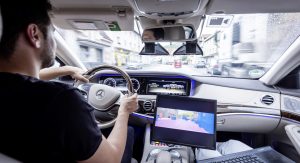