The upgraded Audi E-Tron will now offer 15 more miles of range, for a total of 271 on the WTLP cycle.

Audi is introducing a technical update to the e-Tron electric SUV that results in a longer driving range and improved efficiency, just in time for the debut of the e-Tron Sportback.

That means that future examples of the e-Tron 55 Quattro will travel for up to 271 miles (436 km) on a full charge as per the WLTP testing cycle, 15 miles (25 km) more than before.

The increased range comes as a result of a new wheel brake that reduces the residual brake torque – that is, the losses caused from the proximity of the brake calipers to the brake discs. In addition, the drive system has become more efficient thanks to the front motor that’s almost entirely disengaged and disconnected from the electrical supply under normal driving.

The battery pack of the e-Tron has a 95 kWh capacity, with 86.5 kWh of them being accessible. Audi has also made some improvements to the cooling system for better efficiency; the pump now uses less power thanks to reduced volume flows in the circuit while the standard heat pump, which harnesses heat from the battery to keep the cabin warm, can boost the driving range by up to 10 percent, depending on the outside temperature.

The updated e-Tron also gets an improved energy recuperation system that can contribute up to 30 percent of the overall range. The distinctions between the three available stages of coasting recuperation are now greater, and on the more aggressive setting the driver enjoys a more pronounced ‘one-pedal’ feeling.

Prospective buyers of the Audi e-Tron will be also get the option of the S-Line package, which includes 20-inch wheels, sportier air suspension and a slightly more aggressive exterior look, courtesy of the sharper bumper up front and a rear diffuser. 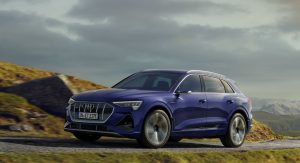 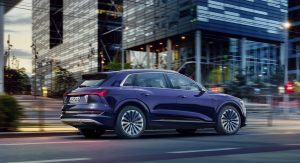 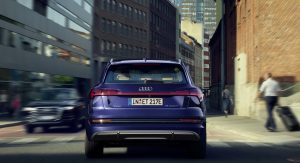